What is a Voice Disorder?

A voice disorder can be defined as a problem involving abnormal pitch, loudness or quality of the sound produced by the larynx, more commonly known as the voice box. Almost every disorder may present in more than one symptom and one cannot associate one single symptom with one specific voice disorder. For example, hoarseness, increased vocal effort or limitations in pitch and loudness may be a sign of any number of disorders. Severity of the voice symptoms varies according to the disorder and the individual. Voice disorders may be present in both adults and children.

What symptoms should I look out for?

Symptoms may include any of the following: hoarseness, shortness of breath, harsh or rough voice, breathy voice, decrease in pitch range, decrease in loudness, deterioration of the voice as the day goes by, loss of voice, increased strain to speak, tension in neck muscles. If symptoms persist for more than three weeks one should seek advice.

How is the voice produced?

Speaking, as well as singing, involve a voice mechanism that is composed of three subsystems: air pressure system, vibratory system and resonating system. Each subsystem is composed of different parts of the body and has specific roles in voice production. The air pressure provides and regulates air pressure to cause vocal folds to vibrate. When we inhale the vocal folds are at rest and thus are apart from each other as in figure 1. When we speak, during exhalation, there is a build up of pressure beneath the vocal cords which brings them together. When the pressure above the closed vocal cords is higher than that below, the vocal cords are burst apart from each other and start vibrating. When they vibrate, they change air pressure to sound waves producing “voiced sound,” frequently described as a “buzzy sound”. The frequency of vibration (that is, how fast they vibrate) depends on the length, tension and mass of the vocal cords. This will determine the pitch of the voice. The resonating system comprises of the throat (pharynx), oral cavity and nasal passages. These change the “buzzy sound” into a person’s recognizable voice. The resonating system gives the individual a personal quality to the voice.

What causes a voice disorder? 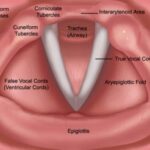 Videostroboscopic View of the Larynx

Voice disorders may be caused by different factors, events, physical ailments and diseases. The vast majority of voice problems are caused by factors that are not life-threatening and that are easily treatable. One of the most common causes is when a person with the potential of having a normal voice, abuses his/her voice and hence develops a chronic voice disorder. Continuous vocal abuse may cause chronic laryngitis, nodules, polyps, cysts and oedema (swelling) of the vocal folds. A study in 2006 showed that more than 50% of voice disorders in Malta were caused by vocal abuse and misuse.

Voice disorders may also be caused by neurological conditions such as Parkinson’s disease, endocrinological (hormonal) disorders and may also result from surgeries such as thyroidectomy or heart bypass.

Can I prevent a voice disorder?

Voice disorders which are caused by vocal misuse and abuse can be prevented by adopting healthy vocal habits on a daily basis. Here are some useful tips:

How can a voice disorder be treated?

A voice disorder often requires both medical treatment and therapy sessions. A speech-language pathologist is trained in providing voice therapy to individuals with a voice problem. Therapy involves exercises that generally focus on breath support, movement of the vocal cords, resonance of the voice, relaxation of those muscles involved in voice production and posture.